admin
In this 30-second commercial, we watch as a group of children run through an open field, laboring with empty glass cups. A shadow appears before the children, and they collectively hold their glasses up to the sky. Suddenly, a cow-spotted UFO, armed with a springy cow udder, squirts out milk from the heavens and into the children's cups in unison.

Milk ads haven't evolved much since the '80s, so how do you break ground on milk advertising when the last great ad campaign was just two words: "Got milk?" Rakunoh Mother's response to that is this fine piece of advertising: confusing, humorous, mildly terrifying.

The Sun speculates that "the UFO theme may well be inspired by the fact drinking milk is a relatively alien concept for many [Japanese] kids." According to the article, the average Japanese person drinks less than the average westerner, even with dwindling dairy sales in the U.S.

This still doesn't fully explain the UFO sporting a giant teat, raining milk from the skies. The commercial's YouTube description, according to Google Translate, says: "Milk is poured directly from the UFO into the cup which the children have! What? Expressing deliciousness directly."

"There's been plenty of bemoaning for years about the growing disconnect between people and where our food comes from," Fast Company pointed out. "And this ad certainly doesn't do anything to remedy that situation."

Farm-to-table takes on new meaning after this ad's revealing space udder. Believe it or not, this cow-to-UFO milk delivery system is just version 2 of Rakunoh Mother's, which also aired a commercial depicting a fleet of UFOs collecting its cows (and milking its udders at the same time), probably to later dispense this milk to the children we saw in the first commercial. 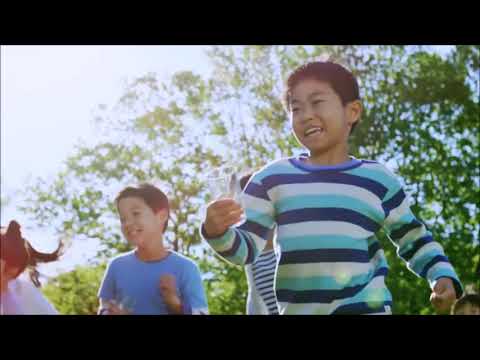 In this 30-second commercial, we watch as a group of children run through an open field, laboring with empty glass cups. A shadow appears before the c...