The rich, the poor and the trash | DW Documentary (inequality documentary)

admin
Inequality is growing. The rich consume much more than the poor and produce much more waste. Trash has become a symbol of our times.

But what some people throw away, means money to others and a chance to survive. The amount of waste we generate and the way we deal with it speak volumes about our consumption and prosperity - and also about our levels of social inequality. In the documentary, "The Rich, the Poor and the Trash," co-directors Naomi Phillips and Thomas Hasel explore the lives of people both working with and living off trash. Twenty-eight-year-old Godwin Ochieng lives in Dandora, a slum in Kenya, where one of the largest dumpsites in Africa is located. He spends his days combing through endless piles of garbage coming in the truckload from the city’s wealthier districts in the hope of finding something to sell: for him, the mountain of trash is a lifeline. One person who tries to help youths in the slum is Godwin Ochieng's role model, hip-hop star Juliani, who also comes from Dandora. The founder of the youth club wants to radically change Kenyan society. Meanwhile, halfway around the globe in one of the world’s richest and most expensive cities, Pierre Simmons searches the streets of New York for cans he can sell to recycling companies. In 2014, Pierre Simmons gave a speech about poverty to the United Nations on behalf of “Sure we can”, a non-profit recycling center in New York. “I don't think anybody here at Sure We Can wants to live like Wall Street people,” says Pierre. Both men live in countries where the gap between rich and poor is vast. But the social gap between the US and Kenya is also huge. Economists Lucas Chancel and Kate Raworth warn against the consequences of a huge imbalance at both the national and international levels. They believe it poses a great danger to our entire system of values in the West, to our understanding of democracy and, ultimately, to our economy.
_______

DW Documentary gives you knowledge beyond the headlines. Watch high-class documentaries from German broadcasters and international production companies. Meet intriguing people, travel to distant lands, get a look behind the complexities of daily life and build a deeper understanding of current affairs and global events. Subscribe and explore the world around you with DW Documentary.

The rich, the poor and the trash | DW Documentary (inequality documentary) 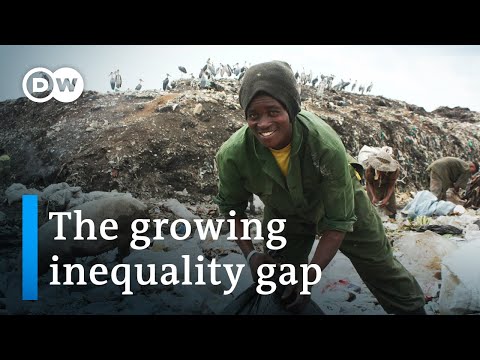 Inequality is growing. The rich consume much more than the poor and produce much more waste. Trash has become a symbol of our times. But what some peo...